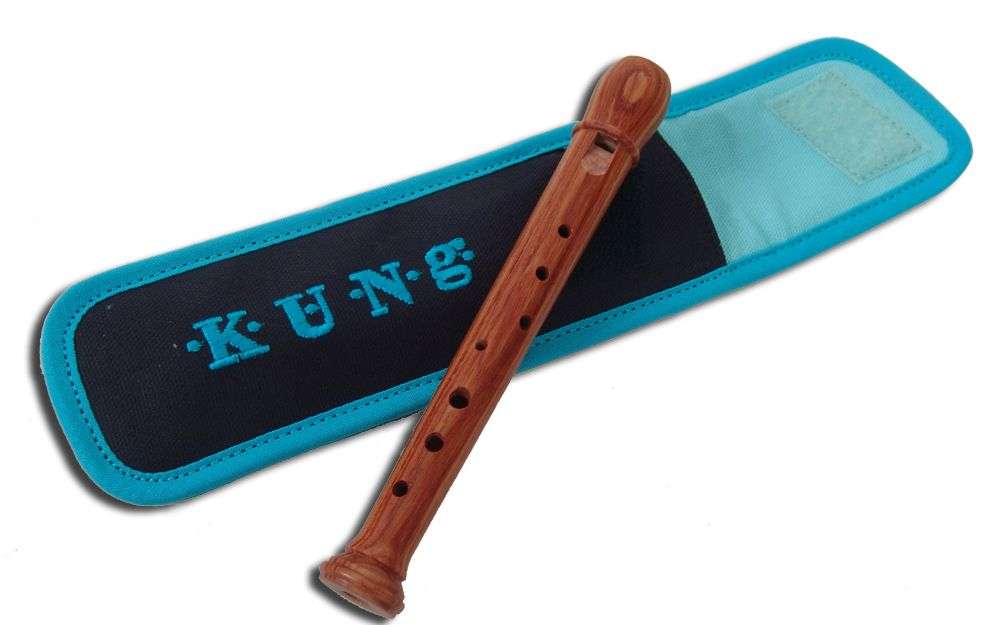 
The Garklein instrument with the article number: 1108-KUE from Küng is a recorder, the in playing constantly will make joy.
This circumstance is based to a large part on the special composition of the outstanding model in fusion with the advantages of the material Tulipwood.

This material makes the instrument a conspicuous uniqueness, by its unique characteristics. The qualities can be descibed approximately so: very inadequately with words. Therefore the sound of recorders is perceived and described by each person inthe details slightly varying. We use these words: Tulipwood: Mellow and yet pithy sound. Especially suitable as a solo flute, but also enriches the ensemble sound.

The course of the inner bore of the instrument is light cylindroconical. This kind of bore course grants the recorder such a special tone.
In principle, instruments with wider bore sound warmer, fuller, more fundamental and thus more suitable for ensembles than models with narrower inner bore.

For what styles can the recorder be used for?

Tulipwood is wonderful for instruments used for: focus on choral playing, recorder ensembles and orchestras, other styles are possible.

To whom is this musical instrument addressed?

For the above facts it follows that instruments made of Tulipwood are especially for ambitious amateurs and advanced players recommendable. A second to be heeded rule is that a higher instrument makes the learning progress usually uncomplicated at first glance low-cost offer.

The windway of a recorder

The windway is the area in the instrument headpiece where the blowing air is formed into a thin sheet of air. This air leaf is of one of the most important elements of the recorders sound. In interaction with the labium, the air stream is very quickly alternately directed inwards and outwards. This swinging flow stimulates the air in the body of the instrument. This is the origin of the recorder tone. This is the reason why the labium must not be damaged in any case. The same applies to the windway. Otherwise suffer the sound and response of the instrument.

The windway of the recorder 1108-KUE of Küng has this windway shape: Straight cylindrical.
Conical windways accelerate the air leaf more than cylindrical shaped windways.
Never underestimate windway and labium! Their meaning for the instrument is uncommon complex in their geometric shape. Damages here often lead to a total loss!

The model Küng 1108-KUE is offered in the following version: Baroque Singlehole .

The number of components a recorder influences basically the way it in use on the one hand is uncomplicated to handle in terms of easy assembling and on the other hand for the compact transport.
This is a point that should not be underestimated, especially when transporting larger (and sometimes multiple) instruments.
{Experienced ensemble players can tell you a thing or two about this. Or ask leaders of recorder ensembles.
Leaders of recorder orchestras know how useful good and compact recorder cases are.

The recorder is offered as standard with: Bag
The matching accessories included:

Hints on the way to new recorders

Inform yourself in detail!
The search for your new instrument should never be influenced by "generally accepted" rules.
Get your own realizations after playing a recorder. Don't let "generally valid" rules, such as "the brand xy doesn't work at all in an ensemble/for professionals.
Do not let others stop you from testing of an yet unknown instrument.
Your musical taste is as individual as you are.
Therefore, only you can decide which recorder will personally inspire.
Our recommendation is therefore: Play also unknown instruments!
After that you will be amazed and can make a safe decision.

Information about instruments with keys

Not always can the tone holes be drilled in places in the the that are pleasant and easy to grasp with the fingers. Especially with larger instruments sit for acoustic necessities some tone holes ergonomically not to reach. On such instruments, by the instrument maker keys are added, which make gripping expressed easier, or possible in the first place.
This allows it to be {pleasant|light|ergonomic|conspicuous|above average| good grip even by players with smaller hands.
The instrument 1108-KUE has the following flaps:
Properties "Küng, "STUDIO", Garklein in c''', Tulipwood"

No reviews found. Be the first to share your insights.
Secure and trackable shipping
Own repair shop
30 days money back guarantee
Safe and secure purchase options
Hotline +1 503-206-6212
Foundation Modal

This Modal is powered by moori Foundation